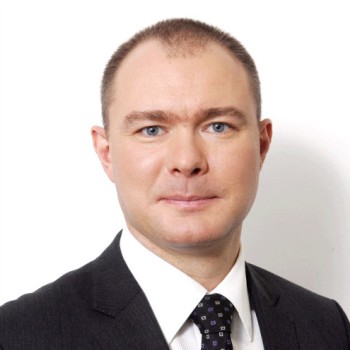 Denis Reshin graduated with honors from the Kazakh National Technical University, Faculty of Automation and Control Systems in 1993. After two years of working in the oil and gas industry, where he introduced automated management systems, he began his professional career in IBM Eastern Europe / Asia in 1995 as a Representative for working with Business Partners, in the Personal Systems Department, where later he was appointed as a Group Leader for working with Business Partners.

In 2001, Denis headed the Department of Personal Systems, and in 2005 became CEO of Lenovo Eastern Europe / Asia. From 2005 to 2009, Denis had been holding the position of Business Development Director of Lenovo EMEA East and CEO of Lenovo Eastern Europe / Asia. His responsibilities included full management of the Russian office and organization of work in the Russian and CIS markets, strategic planning and development of the representative office in order to ensure sales growth and market share expansion, business transformation, resource planning, development and launch of the retail business and construction of a fully functional Teams for working with large customers.

In 2009, he returned to IBM as a Sales Director and managed sales of integrated solutions, the development of new distribution channels for small and medium-sized business and was responsible for regional development. In October 2010, Denis Reshin became a Director of the Server department of the standard architecture of the Central and Eastern Europe region, IBM.

From October 2013 to the end of 2014 he had been a Director of Sales and Business Development in Russia and CIS countries, in the company IHS. In this position, Denis Reshin was responsible for selling of the entire range of the company's products - information support, analytics, application software, consulting in the fuel and energy complex and oil and gas industry.

In December 2014, Denis Reshin came to IBM as a Director of the Systems Hardware Department. His responsibilities include managing a team of more than 100 people from the sales department, technical department, organizing and managing a full cycle of work with partners and customers, developing a business strategy to increase sales and expand market share, and developing business in the regions.

Denis received the MBA for IBM senior management, trained in the "Miller / Heiman sales for high-level decision making" program, studied at the Lenovo University, the "Effective Governance" program and the Business School of the Open University of England, where he received the MBA of "International Enterprise" Specialization.